Rick Santorum Flying all the way into White House 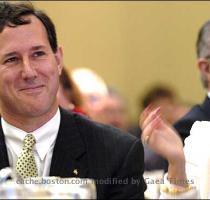 WASHINGTON (GaeaTimes.com) — Rick Santorum who happens to be a former senator from Pennsylvania is known for being the most frequent fliers when it comes to the roster of possible 2012 GOP presidential hopefuls.

Over the last year and a couple of months altogether he has reportedly made 8 trips to Iowa and 7 to South Carolina.

The spokeswoman for Santorum’s political action committee told on last Friday that Santorum will be meeting with members of the Quad City Tea Party to “share his views on fiscal, national security and social issues,” in addition to several private meetings with activists and party leaders on Wednesday, December 15.

This year Santorum may turn out to be lucky but things weren’t the same as the former two-term senator lost his 2006 re-election bid by 18 points and was largely out of public view since then except for appearances on Fox News.

This years polls registers him in the low single digits among Republican voters when it comes to the choice for their party’s next presidential nominee.

LOS ANGELES (GaeaTimes.com)- All the loyal fans of "The Walking Dead" were waiting with bated br...

MELBOURNE - It seems employers and recruitment companies look beyond the resume, letters of recommen...

The times are a little tough for the zombies. Now on one hand They have had their limbs chopped ...

Lil Wayne Thanked his Fans for Supporting him

"The Walking Dead" Premieres On AMC

LOS ANGELES (GaeaTimes.com)- The story of an aftermath of zombie apocalypse, "The Walking Dead" ...

BOULDER (GaeaTimes.com)- The city of Boulder and its foothills are experiencing wide evacuations...

LONDON - Two and a Half Men actor Charlie Sheen was reportedly found naked and covered in cocaine in...

KOLKATA - In a bid to save the environment, jute manufacturers in West Bengal spread awareness amo...
Copyright© 2010 The Gaea Times