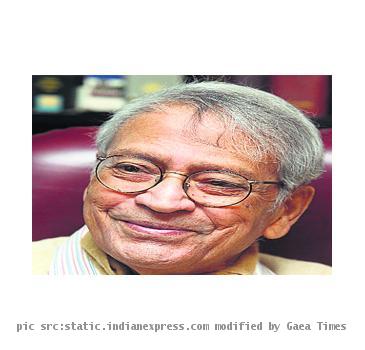 KOLKATA, INDIA (GaeaTimes.com)- Former Chief Minister of West Bengal, Siddhartha Shankar Roy passed away at his Kolkata residence yesterday evening. His family announced the news to the media and said that the veteran Congress leader died after battling a protracted illness. The media outlets reported that Siddhartha Shankar Ray had been suffering from kidney ailments and was on dialysis since last March. He was 90-years-old.

Siddhartha Shankar Ray was one of the most prominent figures of West Bengal politics and he played an important role in the national arena. The former Education Minister of India was also associated with the Khalistan movement of Punjab, the Naxalite movement, to name a few. The Director General Police of Punjab, KPS Gill expressed his condolences at the unfortunate demise of the former Governor of Punjab and remembered him saying that when Siddhartha Shankar Ray became the governor of Punjab, the state was one of its “worst phases” in history. KPS Gill also said that the former Governor tried to improve “efficiency” of the state and he was also concerned with “violation” of “human rights”.

Many renowned politicians, celebrities and businessmen expressed their condolence at the death of Siddhartha Shankar Ray. Trinamool Congress chief Mamata Banerjee, PCC chief Manas Bhunia, Chief minister Buddhadeb Bhattacharjee expressed their condolences and remembered him. Siddhartha Shankar Ray’s family has announced that his body will be kept at his residence for people to pay their last respects and after that it will be taken to the assembly, the Writers’ Buildings, the Cricket Association of Bengal office and the Calcutta high court before taking him to Keoratala burning ghat. Siddhartha Shankar Ray is survived by his wife.