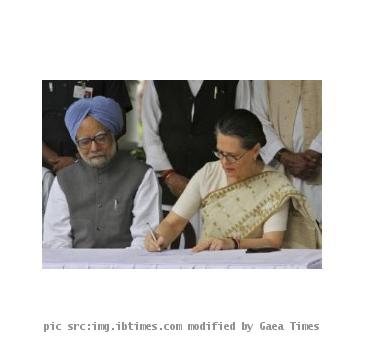 BOSTON (GaeaTimes.com)- Congress President Sonia Gandhi has bagged the ninth spot in this year’s Forbes list of the most powerful people all across the world. Other Indians who are giving the Congress chief company in the much-coveted list are Prime Minister Manmohan Singh, Tata Group Chairman Ratan Tata, Reliance Industries Chairman Mukesh Ambani as well as Lakshmi Mittal, the Chairman of the steel giant ArcelorMittal. Although Sonia Gandhi is among the top ten in the Forbes 2010 list of the most powerful people, interesting, the Congress leader was not featured in the list of the world’s most powerful women which was released by Forbes recently.

While explaining its decision to select Sonia Gandhi in the ninth position of the list, the magazine says that over the years, the Congress chief has been successful in cementing her “status as true heiress to the Nehru-Gandhi political dynasty.” The magazine further goes on to say that despite factors such as her Italian origin, her political reluctance as well as foreign religion, Sonia Gandhi “wields unequaled influence over 1.2 billion Indians.” At the same time, Forbes also says that the 63-year-old Congress leader continues to remain the main force behind the nuclear-tipped throne after she “handpicked brainy Sikh economist Manmohan Singh” as the perfect candidate to assume responsibilities of the Prime Minister of the nation.

While Sonia Gandhi reserves the ninth spot, Prime Minister Manmohan Singh follows her in the 18th position on the list of the world’s most powerful people. Meanwhile, the top slot has been registered by China’s President Hu Jintao who surpassed United States President Barack Obama, who came at the second position.