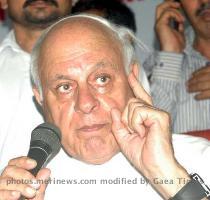 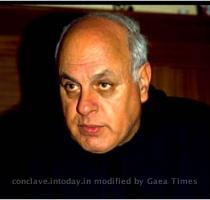 Abdullah’s meeting with the two senior leaders assumes significance in the wake of reports that an all-party delegation is expected to reach Srinagar on Monday to make an assessment of the situation prevailing in the Kashmir Valley, and to forward recommendations for a possible solution thereafter.

Abdullah’s meetings on Thursday came a day after an all-party meeting in New Delhi that was presided over by Prime Minister Singh.

Though no consensus emerged on key issues that formed the agenda of the over five-hour-long marathon meeting chaired by the Prime Minister, Dr. Manmohan Singh, political leaders expressed satisfaction with the tone and tenor of the deliberations.

Removal or amending the controversial Armed Forces Special Powers Act (AFSPA) will not be under consideration for now, as the leaders said that efforts to restore peace must be given a chance to succeed.

Farooq Abdullah had then said that he was not disappointed with the outcome of the meeting and also stressed that the “The Prime Minister praised Omar.”

The Central Government had earlier issued an official statement that acknowledged a “governance-deficit” in Jammu and Kashmir. Sources close to Chief Minister Omar Abdullah said that while he was disappointed with the remark, he was not thinking of resigning just yet.

With Congress general secretary Rahul Gandhi coming out in support of Omar Abdullah during a meeting with the media in West Bengal, and also saying that the situation in Kashmir should not be treated as a part-time problem, but as a serious and full-blown one, the signs suggest that there is no likelihood of an immediate change in the state administration in Jammu and Kashmir.

The central government has said that it will wait for the feedback from the all-party delegation before evolving a final response on various issues relating to Jammu and Kashmir.

Prime Minister Singh has said that dialogue is the only route to lasting peace in the region, and that meaningful dialogue can happen only in an atmosphere free from violence and confrontation.

The Central and State Governments have already appealed to the people of Jammu and Kashmir, especially the youth, to eschew violence.

“We are ready for dialogue with anybody or any group that does not espouse or practice violence,” he said on Wednesday.

The death toll from the violence in the Kashmir Valley has crossed the 90 mark in the last three months. Clashes between stone-pelters and security forces have become a near-daily feature in the streets.

Congress President Sonia Gandhi had said on Wednesday that: “We must ask ourselves why is there so much anger. Why is there so much pain, in particular amongst the youth…we must give them hope, we must understand and respect their legitimate aspirations.”

Much of the discussion in the meeting focused on the controversial Armed Forces Special Powers Act (AFSPA). Opinion on the Act is divided not just between parties, but within the government as well.

The Act is criticized for giving the Army sweeping powers - it can conduct searches and arrests without warrants, for example.

Bharatiya Janata Party spokesman Ravi Shankar Prasad said that the party would support all government initiatives in Kashmir that were within the boundaries of the Indian Constitution. (ANI)