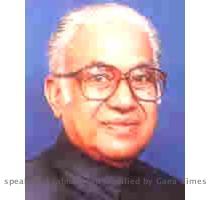 NEW DELHI, INDIA (GaeaTimes.com)- Bali Ram Bhagat, the ace Congress leader, left for the heavenly abode, at Apollo hospital on Sunday, in New Delhi, at 2.30 am, after undergoing intense treatment for kidney and liver problems. He is survived by his son, wife Vidhya Bhagat and daughter. He was 89.

His body will be brought to his home town Patna, today, where he will kept at Sadaquat Ashram. In the afternoon, his body would be cremated at Gulbi Ghat, in the presence of his family and all the veteran politicians of the state. Sampoorna Kranti Express, would carry his body from Delhi to Patna today. Bihar Chief minister Nitish Kumar expressed his grief and said that they have lost an “expert of legislative business” and a great politician. Chief Minister of Himachal Pradesh, Prof Prem Kumar Dhumal, also expressed his support for his family, after the demise of this veteran Congressman. He also added that Bali Ram Bhagat would be remembered for his undaunted services to the poor people of Himachal Pradesh, and his dedication for the upliftment of the pauperized in the state. Governor of Himachal Pradesh, Smt. Urmila Singh said that he was a man of status and a great social worker, who would remain immortal in the minds of several common people. His demise was also mourned by Congress President Sonia Gandhi, State Congress President Chaudhary Mehboob Ali Qaiser, Lalu Prasad Yadav and Jagannath Mishra.

Apart from being a competent Congress leader, Bali Ram Bhagat has also been a Lok Sabha Speaker, from the year 1976 to 1977, during the reign of Indira Gandhi. From 1985 to 1986, he was the Minister for External Affairs of India. Later on, in 1993, he became the governor of Himachal Pradesh for a short period of time, and then, from 1993 to 1998, he reigned as the Governor of Rajasthan.

LONDON - A study has suggested that Internet chatrooms and social networking sites are to be blamed ...

LONDON - A man has come forward to claim that songs he recorded mimicking Michael Jackson are now be...

ABU DHABI - President Pratibha Devisingh Patil, who is on her maiden visit to the Gulf region, inaug...
Copyright© 2011 The Gaea Times