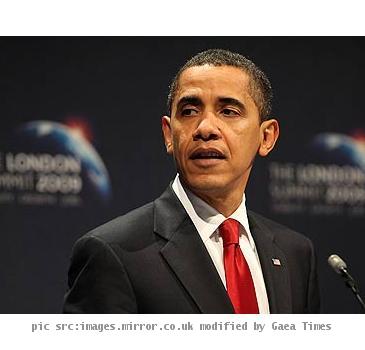 WASHINGTON - Days ahead of a visit to India, US President Barack Obama faces the prospects of a radically altered political landscape with a widely predicted rout for his Democratic party in Tuesday’s mid-term elections.

Obama himself is not up for re-election until 2012, but polls and pundits alike suggest opposition Republicans are poised to gain control of the 435-member House, which goes to the polls every two years, and make substantial gains in the Senate where 37 of 100 seats are up for grabs.

Latest polls suggest that Democrats would lose 40 to 55 of their 255 seats in the current House where Republicans need 39 seats to take control of the House. But in the Senate, where Democrats have 59 seats, they may just fall short of the 10 needed to get the majority.

The last polls, in Alaska and Hawaii, won’t close until midnight Washington time (9:30 a.m. IST Wednesday), but it should be clear earlier in the evening whether the trumpeted Republican tidal wave has arrived, or whether Democrats have weathered the storm.

In either scenario, in the American scheme of things, Obama may lose steam, but not the power as in the parliamentary system followed in India. In fact, the loss of majority may prove a blessing in disguise for the embattled president.

As analysts have suggested he could well follow the model of former president Bill Clinton, who lost majority in both chambers in his first midterm elections in 1994, two years after entering the White House.

Like Obama’s planned ten day trip to India and three other Asian nations, Clinton too left for a whirlwind trip to Indonesia after defeat. But on return, he adopted a blow hot and blow cold policy, sometimes compromising with Republicans and at others daring the opposition as he did during the government shutdown of 1995.

Some of the issues Obama has said he wants to pursue next year, such as deficit reduction and education initiatives, resemble the kinds of narrow and achievable priorities Clinton embraced immediately after both houses changed hands in 1994, according to the Washington Post.

But complicating the post-election scene would be Republicans from the populist, conservative/libertarian Tea Party movement that emerged in 2009, who would be little mood for compromise or bipartisan legislation on any major issues in the House, observers say.

The movement has no central leadership but is a loose affiliation of smaller local groups. Taking a leaf from the 1773 Boston Tea Party, when colonists destroyed British tea to protest taxes, they stand for cutting back the size of government, lowering taxes and reducing wasteful spending, reducing the national debt and federal budget deficit among other things.

While Republican minority leader John Boehner, who would be the next speaker should Republicans regain control of the House, plans reforms that he says will make the chamber work better, he’s already signalled he’s not planning to negotiate with the White House or congressional Democrats on his party’s top priorities.

In the Senate, experts say Republican gains won’t improve prospects of bipartisan cooperation. The animosity and distrust between the two parties is already thick, and likely to get worse as the 2012 presidential campaign gets under way.

(Arun Kumar can be contacted at arun.kumar@ians.in)