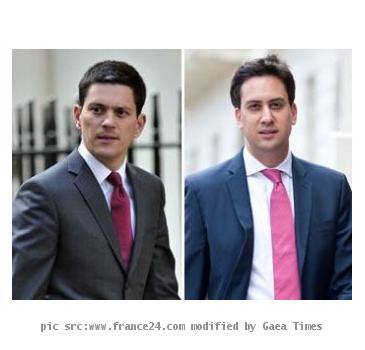 MANCHESTER (GaeaTimes.com) — The rivalry between the Miliband brothers seems to beef up with the every passing day. Their feud came into lime light in the new Labour leader’s debut conference and was powerful enough to spoiled the objective of the conference.

David, who is allegedly going to resign from his work in his younger brother’s reputed company today, openly condemned Ed’s attack on the decision of Iraq invasion.

Earlier in his speech Ed tried to turn the page on New Labour by declaring that the ‘new generation’ of Britain is not supporting war against Iraq and also insisted that it had been ‘wrong to take Britain to war’.

While Ed was delivering his speech, David was caught sitting in the front row with a stony-face. He got angry with party’s deputy leader Harriet Harman as she was applauding Ed.

You voted for it, why are you clapping?

Miss Harman was a bit astonished by this but hit him back cleverly, ‘I’m clapping because he is the leader, and as you know, I’m supporting him.’

Later David was seen nodding his head as Ed complained about the nickname he was given by some of his brother’s supporters ‘Forrest Gump’, after the dim-witted and innocent character in the Tom Hanks film.

Cracks between the Miliband brothers has gone far beyond and Labour’s high command is trying to settle down the spat that otherwise might turn leadership rival.