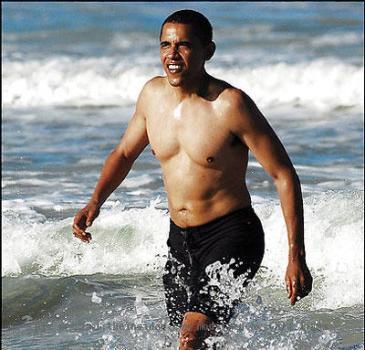 HAWAII (GaeaTimes.com)- Last year the paparazzi succeeded in snapping some photos of US president Barack Obama on the beach and at that time he was not wearing any shirt. The internet as well as other media entities went gaga over the photos and many of the viewers said that the president has a fit body. The shirtless pictures of the US president got circulated in the web in no time and they became a topic of discussion for many. This weekend the president along with his family decided to spend the vacation in Florida. He also swam with his daughters in the Gulf of Mexico.

This time the president did not want any bare pictures of him to be snapped. It seems that the desire of the President has been fulfilled. One picture of the president with his daughter has been released but in it his chest is beneath the water. However, the viewers can get the impression that his physique has not changed much from last year. He still has that athletic figure which drew him many accolades. The staff of the President made sure this time that no paparazzi can get near to the beach while he enjoys swimming with his daughter. The new shirtless picture of President Barack Obama seems decent enough.

In fact the White House staff ensured that the photographers stay inside the hotel for at least 3 hours while the president enjoys the bath shirtless. The photo that has been published was taken by a White House staff. By swimming in the Gulf of Mexico President Barack Obama tried to assure the residents that the water is now safe.