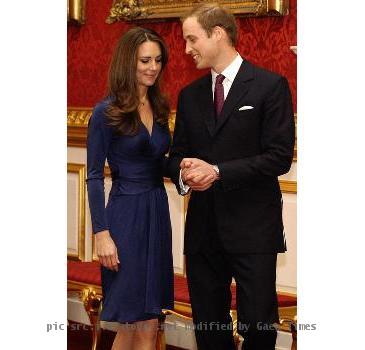 LONDON, UNITED KINGDOM (GaeaTimes.com)- Following the announcement of their much-anticipated wedding, Prince William and his lady love Kate Middleton appeared in their first television interview on Tuesday night. The joint interview witnessed the soon-to-be married royal couple talking candidly about their relationship and how the second in line to the British throne popped the question to his lady love last month in Kenya. The couple met each other for the first time way back in the year 2001 while they were both studying at Scotland’s University of St. Andrews and since then the pair have been involved in an on and off relationship.

During their first joint television interview, Prince William divulged that he popped the question to Kate Middleton while they were holidaying in Kenya in the month of October and given the fact that he had been planning it for a while, it was not much of a surprise. The 28-year-old British prince also revealed that he had proposed to his longtime girlfriend with the same engagement ring that his mother Princess Diana wore while tying the knot with Prince Charles. At the same time, Kate Middleton also revealed her side of the story and added that the proposal from her beau during the Kenya holiday left her rather shocked although she was immensely excited about it.

When asked about whether it was love at first sight for the couple, Prince William added in the interview that when he saw Kate Middleton for the very first time, he knew there was something about her that was very special. The much-awaited wedding of the love-birds would be the biggest event in Britain since the fairy-tale wedding of Prince Charles and Lady Diana in 1981.