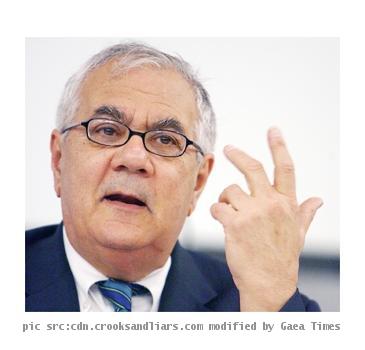 WASHINGTON (GaeaTimes.com) – Barney Frank, the Democratic Representative proudly retained his seat of the House Financial Services Committee after a bitter election on Tuesday. The US liberal lawmaker and the co-author of the new controversial financial regulation law, Mr. Frank won his seat in the House of Representatives after defeating Republican Sean Bielat.

Frank has been ruling this seat for three decades. He has been in this prestigious position since 2007. His re-election this time seems to be quite smooth as his opponent Sean Bielat was defeated on a wider margin. According to reports Frank was polling 57 percent of votes to Bielat’s 40 percent.

After his victory, Barney Frank commented on the ugly nature of the 2010 election. He abused the continuous drainage of money in many electoral races. His district stretches from the affluent Boston suburbs of Newton and Wellesley to economically depressed cities of Fall River and New Bedford in southeastern Massachusetts. He talked about the causes of unemployment in US that is still alarmingly high through the country.