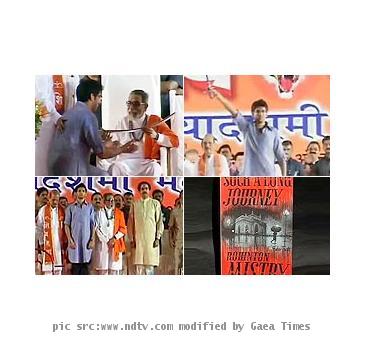 Aditya Thackeray was introduced to the public by none other than Shiv Sena patriarch Bal Thackeray who presented his grandson with a sword to mark his inclusion in the party. The rally which was attended by a huge crowd of 200,000 people cheered boisterously when the 20-year-old received the gleaming sword from his grandfather and went on to seek his blessings before raising the sword and waving to the large number of people gathered at the venue. Although Aditya Thackeray chose to stay away from addressing the crowd on Sunday, Shiv Sena chief Bal Thackeray went on to urge followers of the party to give their blessings to the third generation of the Thackeray family in the political scenario. In the speech that was delivered by the Shiv Sena supremo, it was emphasized that Aditya Thackeray had progressed in the party through his sheer hard work and deeds while an appeal was made to the Shiv Sainiks to encourage and support him.

In the meanwhile, sources have pointed out that the decision to launch a youth wing under Aditya Thackeray was taken keeping in view the increasing influence of the Raj Thackeray’s Maharashtra Navnirman Sena (MNS) on the young minds.