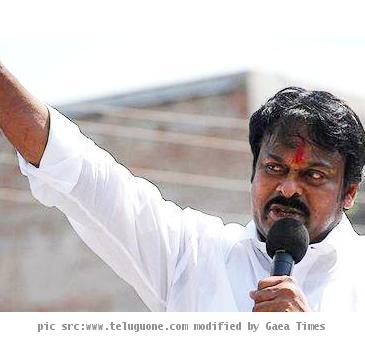 HYDERABAD, INDIA (GaeaTimes.com) — While staging a dharna (protest) in front of APIIC (Andhra Pradesh Industrial Infrastructure Corporation ) office, Praja Rajyam president K. Chiranjeevi was arrested along with his party men on Monday. They were demanding a CBI probe into the land deals that were allegedly distributed to corporate houses violating the law.

In this program, Chiranjeevi was accompanied by party leaders, including Kanna Babu, Ganta Srinivasa Rao, P. Gandhimohan, C. Ramachandraiah, B. Veda Vyas and D.T. Naik. They were shouting on the land distribution issue. Accoding to Praja Rajyam supremo, thousands of acres of land was given away to real estate developers and industrial houses depriving the poor farmers of their precious properties. The farmers were even deprived of adequate compensation.

Mr. Chiranjeevi said it was just the tip of the iceberg. “We will not stop until justice is done to each and every poor man whose land was forcibly taken away by the corporation,” he announced. He brought the reference of the latest controversy that involves EMAAR properties land deal. It caused a mammoth loss to the APIIC.

But, Mr. Chiranjeevi appeared keen on resolving the mystery behind the land deal with the help of CBI investigation and take the culprit out in the day light.

No sooner the protesters tried to get through the APIIC office and submit a memorandum than they were arrested. They were forcefully kept into waiting lorries, but later released on personal surety.