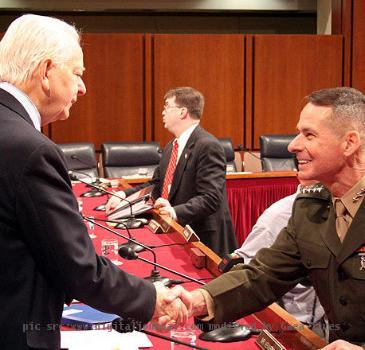 more images
WASHINGTON (GaeaTimes.com)- Robert C. Byrd, the West Virginia senator who is known to be the longest serving member of the United States Senate breathed his last on Monday at the age of 92. A spokesperson of the veteran politician revealed that Robert C. Byrd passed away at a medical facility in Fairfax, Virginia on early Monday morning. The senator who had served the United States Senate for 51 years, was known to be confronting failing health for the last few years.

On Sunday afternoon, the office of Robert C. Byrd released a statement which revealed that the West Virginia senator had been hospitalized at the Inova Fairfax Hospital in Virginia after he complained of heat exhaustion as well as severe dehydration. Family spokesperson Jesse Jacobs confirmed the news of his demise while adding that the senator passed away after certain complications arose from heat exhaustion and dehydration. While reacting to the news of the veteran politician’s death, United States President Barack Obama described Robert C. Byrd as a institution within an institution while adding that the nation has ‘lost a voice of principle and reason.’ Since the news of the West Virginia senator’s death spread, condolences have been pouring in from various quarters in the political circle of the country with many observers describing the death of Robert C. Byrd as the end of an era.