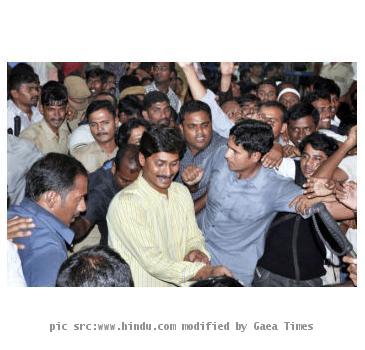 HYDERABAD, INDIA (GaeaTimes.com)- With Congress Member of Parliament Y.S. Jaganmohan Reddy submitting his resignation to AICC chairperson Sonia Gandhi on Monday, reactions have been pouring in from various quarters. The Congress leader’s decision to parts ways from the party has already managed to create a furore in the state Congress while the rival parties have also been vocal about their opposition of Y.S. Jaganmohan Reddy’s resignation.

The top brass of the opposition parties have criticized Y.S. Jaganmohan Reddy’s decision to resign as an attempt to destabilize the government of the state of Andhra Pradesh. While talking to reporters on Monday following the Congress leader’s resignation, TDP MLA Revanth Reddy reiterated that TDP MLA Revanth Reddy decided to bid adieu to the party as he was not made the Chief Minister of the state. The TDP MLA further went on to say that it is really condemnable that a son takes it for granted that he would be assigned the post of the Chief Minister following the demise of his father. Y.S. Jaganmohan Reddy, who is the son of former Chief Minister Y. S. Rajasekhara Reddy, is reported to have been at loggerheads with the party high command since his father passed away last year in September.

In the meanwhile, after Y.S. Jaganmohan Reddy submitted his resignation letter to Sonia Gandhi, his supporters in his native district of Kadapa as well as the Anantpur district have showcased their protests against the top brass of Congress party. Supporters of the Congress leader created a havoc in the party offices of the district, going on a rampage and damaging furnitures as a mark of protest against the Congress MP’s resignation.

HYDERABAD - Congress workers on Sunday protested the telecast of a news programme on a telugu n...

NEW DELHI - The Congress has sought a report from its Andhra Pradesh unit on a programme aired by Sa...